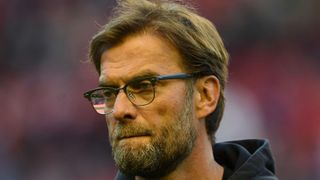 Jurgen Klopp hopes Divock Origi can return to action before the end of the season but the Liverpool manager will not take any risks with the injured forward.

It was initially feared Origi had sustained a broken ankle after being tackled heavily by Ramiro Funes Mori during Liverpool's 4-0 derby win over Everton at Anfield on Wednesday.

Scans cleared the 21-year-old of a fracture but the Belgium international has sustained ligament damage, meaning he is likely to miss the majority of the final weeks of the season, including both legs of the Europa League semi-final against Villarreal, starting with the first meeting at El Madrigal on Thursday.

"It's serious. What can I say? We will try everything but... without taking a risk with the player," Klopp said at a news conference ahead of the Premier League match at home to Newcastle on Saturday.

"I did my ACL and played after four months. No-one could believe it. We should not say Origi's season is over.

"I am long enough in this business to know we're all different, we are all individuals. We have to work with him and see."

Origi must hope Liverpool progress to the Europa League final in Basel on May 18, while Belgium's Euro 2016 campaign begins against Italy in Lyon on June 13.

The forward's enforced absence could yet afford international team-mate Christian Benteke an opportunity to revive both his flagging Liverpool career and his hopes of featuring meaningfully at the European Championship.