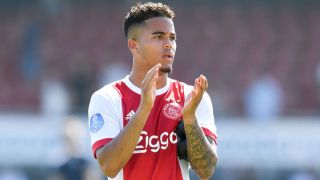 Justin Kluivert hopes to follow in the footsteps of club legend Francesco Totti as he plans to prove his worth at Roma.

The teenage winger - son of former Barcelona striker Patrick - has joined from Ajax after scoring 10 goals in 30 Eredivisie appearances in the 2017-18 season.

Roma secured his services for an initial fee of €17.25million in June, though the Netherlands international - who signed a five-year deal - had to wait for his official presentation in the Italian capital.

Speaking to the media on Thursday, Kluivert said: "I want to show what I can do and prove my worth. I want to do better than I did in Holland.

"I can and must improve a lot. I can't wait to begin the season. With the players we have, we can achieve big things this year.

"Being here at Roma is a big step in my career. I've joined a huge club – an ambitious club that wants to keep growing.

"For me, Serie A is in no way inferior to LaLiga or the Premier League. There are some massive clubs and top players here."

The 19-year-old will use Totti as an inspiration to help him succeed at Roma, acknowledging performances on the field will help him earn the respect of both the club's fans and his new team-mates.

"Francesco Totti is a great role model. He's a club legend and an example for anyone who joins Roma," Kluivert added.

"I want to be like him one day, to have the respect of the people – but you can only do that by showing it on the pitch with your feet."

PRESS CONFERENCE | | Justin Kluivert is currently being presented to the media at Trigoria by sporting director Monchi. Key quotes to follow...July 19, 2018

Sporting director Monchi was pleased to see off the competition to secure the services of one of the most sought-after talents in Europe.

"It wasn't all that easy to sign Justin because everyone was interested in him," the Spaniard told the media.

"The first meeting we had was really important because it was a chance to show him that Roma was the perfect place for him at this stage in his career."