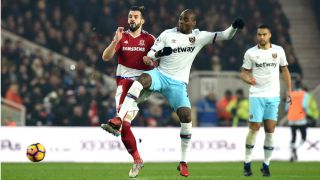 Angelo Ogbonna is set to miss the rest of the season as he requires surgery on a knee injury, West Ham manager Slaven Bilic has confirmed.

Ogbonna played the full 90 minutes of West Ham's Andy Carroll-inspired 3-1 victory over Middlesbrough on Saturday, but will now sit out the rest of the Premier League campaign.

The former Juventus defender has been suffering with a long-standing issue and with Jose Fonte having arrived from Southampton in an £8million deal on Friday, Bilic has revealed the Italian is now set for surgery.

"I have to praise Angelo Ogbonna, because he has played the whole season with an injury," Bilic said.

BREAKING: Slaven Bilic has revealed that requires knee surgery and will be out for the remainder of the season. More...January 21, 2017

"He needs an operation on his knee to be fit long-term, and it was supposed to be a couple of weeks but we asked him to play.

"He will now have surgery which will rule him out until the end of the season."

Fonte not registered in time to take part at the Riverside Stadium, with Ogbonna starting despite his injury struggles.

However, it mattered little as, in the continued absence of want-away playmaker Dimitri Payet, West Ham secured their second successive league victory.

Following on from his wonder-goal against Crystal Palace last time out, Carroll opened the scoring in the ninth minute with a typically venomous header.

Cristhian Stuani levelled proceedings, only for Carroll to restore West Ham's advantage in the first half before Jonathan Calleri added a third late on.

And Bilic was enthused by his side's display, singling out Carroll for praise.

"It's been a good week for us," Bilic told BBC Sport. "To come here and get three massive points for us is great."

"Andy was fantastic again. He makes his work-rate and presence and quality count. He gives you everything at both ends of the pitch.

"Hopefully he is going to stay fit."