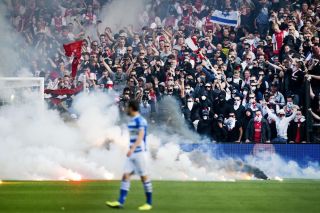 The Eredivisie leaders were hammered 5-1 by PEC Zwolle at De Kuip in a game that was marred by scenes of violence from the capital club's supporters.

Fans threw fireworks and smoke bombs onto the pitch while also setting an advertising board on fire, causing the game to be stopped twice in the first five minutes.

KNVB director Bert van Oostveen was quick to slam the actions of the Ajax followers, vowing to sanction the culprits.

"It was an unacceptable start to an outstanding cup final with PEC a fantastic winner," Van Oostveen said.

"The events in the first five minutes of the game were very disappointing. We will work with the clubs and the local authorities thoroughly to evaluate this and we will try to track down and punish the perpetrators."

Ajax have since made a written apology to the KNVB and launched an investigation into the disturbances.

A statement from the club on Monday read: "Yesterday should have been a fantastic day for our club and our supporters. Unfortunately a group of visiting companions felt the need to ruin this football feast.

"Our club has been discredited by their reprehensible behaviour. We as management are sincerely ashamed for these people, who imagine themselves to be supporters of our club.

"We have today made a written apology to the KNVB. We also made to apologies to the De Kuip stadium where we were guests.

"We offer PEC Zwolle congratulations again as the winner of the final.

"Meanwhile Ajax has launched an in-depth investigation into the state of affairs. The city of Amsterdam has invited us to enter into consultations in which the police and the Public Prosecution Service will also be involved.

"We will also consult with the KNVB and the supporters association(s). We will come up with appropriate measures."