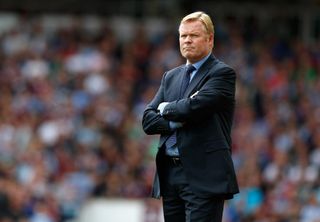 The Dutchman picked up his first Premier League win with the help of a brace from French midfielder Morgan Schneiderlin.

Schneiderlin cancelled out Mark Noble's deflected opener prior to the interval and added another in the second half before Graziano Pelle opened his league account for the club to wrap up the points.

Koeman feels his side lacked a measure of belief going into the break before ensuring what he felt was a well-earned victory at Upton Park.

"I think we deserved to win. We started very well today and in the first 15 minutes we were in total control," Koeman said.

"I don't know why we then suffered problems. Maybe because West Ham played long balls and long throw-ins - it's always difficult to fight a second ball.

"We lost a little bit of control but luckily we scored [to make it] 1-1 before half-time.

"I told the boys at half-time: 'Keep the spirit and believe in winning. Don't play for a draw. We are much better than West Ham, today, and you have to believe that'.

"I think we did that in the second half."

Koeman's fledgling reign has shown plenty of signs for promise after a close-season that saw predecessor Mauricio Pochettino leave for Tottenham and a host of key players also depart.

The former Feyenoord coach feels the benefits of a change in training methods was evident on Saturday, adding his pleasure at going into the international break off the back of a win.

"We train very differently from last season - less physical exercise and more football, more positioning exercises and we showed that in the last 15 minutes," he added.

"That's the way I like to play. I know we have to run and fight but winning games is about trying to do that in a football way and we have the players for that.

"It's very important to win before the international break because now we have four points and we needed that."