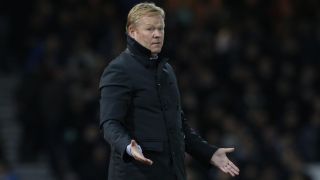 Southampton manager Ronald Koeman warned the club's chiefs they risk losing him unless they back him in the transfer market.

The Dutchman, who has been in charge since mid-2014, will see his contract at St Mary's expire at the end of next season.

Southampton have impressed in the Premier League despite selling their best players in the past two off-seasons.

But Koeman said he needed to be backed to strengthen his squad if he was to stay.

“My future is depending on what the club can do. We will speak about it," he said.

"It is all about ambition. I hate to stay in a situation where there is no ambition.

"Until today the club is showing that ambition and if we continue like that, the possibility is to grow and to spend money.

"Of course that will have a big influence in my decision to stay or not to stay.

"The club is doing everything we can but that is about next season, to bring better players in and have more competition and to grow as a team."

Midfielder Victor Wanyama is one player Koeman is eager to keep after the Kenyan almost joined Tottenham in the off-season.

Wanyama's contract expires in mid-2017 and Koeman confirmed talks were in progress.

"There are some players that the club is talking to about contracts and Victor is one of them," he said.

"Because we had that problem at the beginning of the season, players have ambitions to play at a higher level.

"If there is interest in a player and the player gets interest he likes to move."