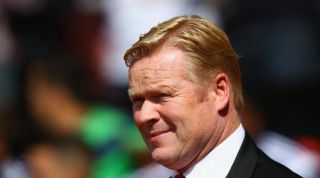 The Premier League club have been ravaged by a spate of sales that has seen the likes of Adam Lallana, Luke Shaw, Dejan Lovren, Calum Chambers and Rickie Lambert leave the club.

And while Koeman has been able to bring in some of his own players, Southampton appear weaker than they were last season as they recorded an eighth-placed finish.

When asked how he viewed the transfer window, Koeman responded on Thursday with: "Difficult because we lost five, six good players. First-team players.

"It's always difficult to bring new ones in. You don't have [much] time.

"We start the league already with two games. It was difficult [integrating players] but we knew that.

"I think the best is when we pass September 1 and everyone can see the squad and then you can really start the season."

Gaston Ramirez and Jack Cork have been linked with moves away from Southampton, but Koeman insists that further departures are unlikely.

"Our squad is too small to think about players [going] out of the squad," he added.

"We have to bring in and not let players out.

"There's a lot of rumours about Jack as well. He's still a player of Southampton and he will stay."

Koeman, who is still hopeful of adding to his squad before Monday's deadline, thinks that a reported move for Atletico Madrid defender Toby Alderweireld was "not realistic", but he is still keen on Tottenham winger Andros Townsend.

"It's difficult because it's [Townsend] one of the players on our list. It's very difficult but I don't expect good news on that," he said.

Southampton started the season with a courageous 2-1 defeat at Liverpool before being held to a goalless draw against West Brom last week.

A 2-0 League Cup success at Millwall on Tuesday has boosted confidence, though, and Koeman knows how important victory at West Ham could be in terms of morale.

Ahead of Southampton's trip to Upton Park on Saturday, he continued: "It's always important to win. It [was] a different competition.

"[Winning] that's the best way to have confidence. You can talk, you can believe, but points always bring in a good feeling.

"Saturday is totally different. It's Premier League and West Ham away is different than Millwall away. We have to be prepared."