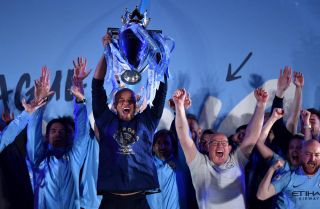 Vincent Kompany claims Manchester City’s latest title success was the most difficult, and the most satisfying, of them all.

The Belgian defender lifted his fourth Premier League trophy after a 4-1 win over Brighton ensured City pipped rivals Liverpool by one point.

“It was the hardest and most satisfying Premier League title win ever,” Kompany told the club website.

“Liverpool were exceptional this year and I don’t mean to rub it in – it is what it is – they didn’t deserve to be second this year.

“But that only makes me that much more happy that we’ve been up against such a good team and when our backs were against the wall we kept finding the results.

“We won at the Etihad against Liverpool and I think that made the difference and once we got our noses in front, we were able to stay in front. I’m so happy for myself, the team and our fans.”

There were a nervous few minutes at the Amex Stadium when news filtered through that Liverpool had gone ahead against Wolves, before Glenn Murray headed Brighton into a shock lead.

“I wasn’t aware,” added Kompany. “I did hear the Brighton fans singing ‘1-0 to the Liverpool’ and then we fell behind, but we’ve done it before and we stayed calm.”

Brighton’s lead lasted just 83 seconds before Sergio Aguero equalised, and there were to be no more twists and turns after Aymeric Laporte headed them into the lead.

Further goals from Riyad Mahrez and Ilkay Gundogan got the party started – and it lasted well into the night with celebrations on the Amex pitch, in the dressing room, and then back in Manchester outside the Etihad Stadium.

Flying-high on the plane back to Manchester last night!— Manchester City (@ManCity) May 13, 2019

“We felt we did everything we needed to do and were magnificent,” said Kompany.

“This title is a combination of the staff, the group of players we have and the desire we have to over-achieve, and it’s hard to over-achieve with a team as good as we have.

“It wasn’t just the way we won – we had so many clean sheets on the run-in, it was ridiculous, and won our last 14 games.

“I’m so proud of the guys because when we had to dig deep and defend and win 1-0, we did it again and again.

“We’re looking forward to the FA Cup final now. What we are doing is unprecedented and we are just thinking about the game against Watford now.”

“They’re the best team and they’ve proved it time and time again,” he said. “They’ve got nerves of steel and they deserve it.”