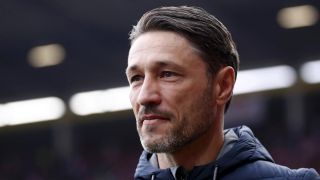 Arjen Robben could return from injury for what Bayern Munich boss Niko Kovac believes is a must-win match against Fortuna Dusseldorf in the Bundesliga.

Bayern are seven points adrift of leaders Borussia Dortmund following their rollercoaster 3-2 defeat in Der Klassiker before the international break.

Saturday's visit of lowly Dusseldorf presents a welcome opportunity to return to winning ways and Robben, who has missed two games with a knee issue, will be closely monitored after looking "really good" in training on Thursday.

Robert Lewandowski suffered a similar problem on Poland duty, but has been cleared to start at the Allianz Arena as Kovac seeks to spark a rise up the table, with Bayern in fifth.

"We're not going to look at the top," said the head coach. "We're just going to make sure we overtake the teams that are right in front of us.

"In order to do that we need to collect points. Of course I feel pressure. We have to win [on Saturday].

: "We need to show the same passion against as we did in the first half in Dortmund. I expect that of my players. If we can do that, we will win the game."November 23, 2018

"I still have the same goal. All of us here want to win the championship. Of course when you win six championships in a row the probability increases that you might not win it.

"But we've not even played half of the season. A lot of things can still happen. On the other hand I'm realistic and I know we're behind expectations and we have to make sure to close that gap now.

"That's why we're not going to talk about the championship right now."

Kovac confirmed Kingsley Coman and Thiago Alcantara will remain wrapped in cotton wool until after the Champions League clash with Benfica on Tuesday.

"We're very happy to have this diamond in the rough here. We didn't sign him for the reserves," he said of the Canada international.