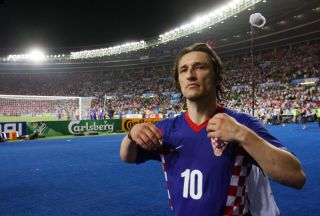 The 42-year-old has been handed the reins on a temporary basis, with Stimac counting the cost of Tuesday's 2-0 FIFA World Cup qualifying defeat away to Scotland.

Stimac offered his resignation in the immediate aftermath of the clash at Hampden Park, with Kovac appointed on the suggestion of Croatia Football Federation president Davor Suker.

Tuesday's disappointing loss to Scotland in the Group A fixture compounded a miserable week for Croatia, who also lost their crucial home encounter with Belgium on Friday and will have to settle for a play-off in order to reach Brazil 2014.

A first-half brace from Romelu Lukaku gave Marc Wilmots' side a commanding lead, and their automatic qualification hopes were curtailed despite Niko Kranjcar's late consolation.

Kovac is the current coach of the Croatia Under-21 set-up, and has also had a spell as assistant manager of Red Bull Salzburg.

He had a distinguished playing career, representing the likes of Bayern Munich and Hamburg, appearing for his country 83 times and captaining them at the 2006 World Cup and UEFA Euro 2008.

Croatia will discover their play-off opponents when the draw is made on Monday.