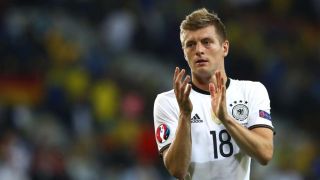 Toni Kroos described Germany's display in their 2-0 semi-final defeat to France as their "best performance" of Euro 2016.

Joachim Low's men dominated for much of the first half only to fall behind when captain Bastian Schweinsteiger needlessly jumped with his arms up trying to block a Patrice Evra flick on inside the area. The ball struck his hand and Antoine Griezmann made no mistake from the spot.

Griezmann grabbed a second after 72 minutes, capitalising on a rare Manuel Neuer mistake, to put the result beyond doubt.

Real Madrid midfielder Kroos said: "We delivered our best performance at Euro 2016 today so it’s strange that we suffered a 2-0 defeat.

"I can't blame the team, we carved out good opportunities. We had three or four excellent chances from headers but we fell further behind after a slip."

Team manager Oliver Bierhoff felt luck had not been on Germany's side.

"We controlled and dominated France," he said.

"We actually had more of the game and should have won. You could see in the closing stages that the ball just wouldn’t go in.

"At the end of the day, France were luckier. I want to pay compliment to the lads."