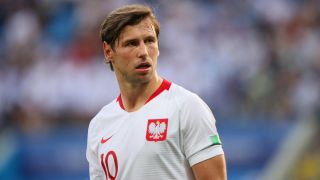 Krychowiak, 28, moved to PSG in 2016 from Sevilla amid interest from Arsenal and, ironically, it was current Gunners boss Unai Emery who brought him to the French capital.

However, he has failed to settle in Paris, making only 11 Ligue 1 appearances before being loaned to West Brom last season, enduring relegation from the Premier League with the Midlands club.

Krychowiak had a similarly difficult World Cup, as his Poland team were eliminated in the group stages.

Having completed his Lokomotiv medical earlier on Tuesday, he has agreed to join Yuri Semin's side in time for the Russian Super Cup clash with CSKA Moscow on Friday.

Lokomotiv are defending Russian champions after winning their first Premier League title since 2004 last season, pipping CSKA to the trophy by only two points.