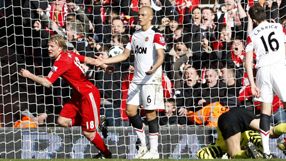 United suffered their second league defeat in a week, after losing 2-1 at Chelsea, and their third in five games to leave them just three points ahead of Arsenal who have played a game less.

GEAR:Up to £20 off Liverpool kits through Kitbag. Free delivery on orders over £50

Kuyt, who had never scored against United since moving to Liverpool in 2006, struck on 34 minutes after some trickery by new signing Luis Suarez.

The workaholic Dutchman doubled Liverpool's lead five minutes later after a misplaced clearance by Nani who left the field on a stretcher soon afterwards following an ugly tackle by Jamie Carragher.

Kuyt put the game beyond United midway through the second half, again with a simple finish, after keeper Edwin van der Sar failed to hold a Suarez free-kick and United substitute Javier Hernandez's stoppage-time header was only scant consolation.

United have 60 points from 29 games. Arsenal have 57 from 28 with Manchester City on 53 from 29. Chelsea, who play Blackpool on Monday, are fourth with 48 from 27 and Tottenham Hotspur also have 48 after Jermain Defoe scored twice in an enthralling 3-3 draw at Wolverhampton Wanderers on Sunday.

Liverpool moved back into the top six on 42 points and their impressive display will add to calls for Kenny Dalglish to get the manager's job long-term after he returned to the hot seat in January to replace the sacked Roy Hodgson.

The Scot, who turned 60 this week, has transformed the club's form since with wins over Chelsea and now United.

"The way we played was really important, and the lads deserve all the credit you can give them for what they achieved today," said Dalglish, who was manager when Liverpool won the last of their 18 titles in 1990.

"We deserved to win, no doubt. It always matters who the opposition are, because you're not going to get too many opponents who are as good as Manchester United."

Liverpool's early-season slump long since ended their own title hopes but they set about trying to put a spanner in the works of United's charge towards a record 19th English title.

Uruguayan Suarez buzzed around from the start and had an early half chance as Liverpool set a high tempo.

However, United's more measured approach gradually got them into the game and Dimitar Berbatov came closest to opening the scoring with a shot that clipped the woodwork.

Suarez unlocked United's makeshift defence with an audacious dribble past Rafael, Michael Carrick and Wes Brown before scuffing the ball across goal for Kuyt who swept the ball into the net for one of the easiest goals of his career.