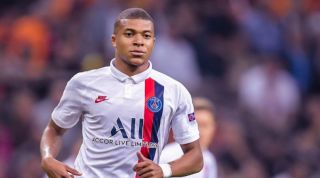 Kylian Mbappe says he is looking to Cristiano Ronaldo for inspiration as it is not possible for him to replicate Lionel Messi's one-club achievements.

Messi has won 10 La Liga titles and four Champions Leagues at Barcelona, the only club he has ever played for.

Ronaldo, on the other hand, has won trophies with Manchester United, Real Madrid and current side Juventus.

Mbappe, who is widely tipped to become the world's best player once the aforementioned duo have departed, is a big fan of both superstars.

But the PSG man, who joined the Ligue 1 giants from Monaco in 2017, has revealed that he is focused on trying to follow in Ronaldo's footsteps.

"It's too late for me to carve out a career like Messi's, I would have had to stay at Monaco," Mbappe told La Gazzetta dello Sport.

"Without taking anything away from Messi, now I have to draw on Cristiano's career for inspiration.

"If you're French, obviously you would have grown up with [Zinedine] Zidane as your idol. After that, it was Cristiano, who I have been fortunate enough to have faced as an opponent, at club level and with the national team.

"I also love Brazilian players like Pele, Ronaldinho, Ronaldo and Kaka. And to the young players who look up to me, I'd like to send them a message from someone who believed in their dream, always giving the best they had to give, trying to push their own limits to be able to make a mark in sport."

Mbappe will hope to win his first ever Champions League this season, but he picked out Juventus as a team to watch.

"Juventus are a strong side - they've shown that in the finals they've played during the past few seasons," he added.

"They have always lacked something to give them the edge and now they have that in Cristiano. He's a player who makes you win major trophies.

"This year Juventus are among the favourites – along with the usual suspects – Real Madrid, Barcelona and Liverpool."