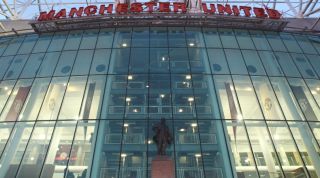 Manchester United actually performed quite well at Anfield. Not during the first half, when – with the exception of that one Andreas Pereira chance – Liverpool’s dominance was almost comical. But certainly in the second. Fred played extremely well. Brandon Williams and Luke Shaw formed a profitable little axis down the left. And, with a little more composure, Anthony Martial might have equalised instead of snatching at United’s best chance and hacking it high and wide.

The trouble with these vaguely encouraging moments, though, is that they always have a subtext. Ole Gunnar Solskjaer carried all sorts of issues into that game, including a lengthy injury list, a team with plenty of inexperience, and now questions over the handling of Marcus Rashford. But acknowledging those asterisks also comes with the recognition that United have spent an awful lot of money just to get to this point.

That is always the prism through which these results are viewed. If the transfer of Bruno Fernandes is completed during the current window, that will take their spending since 2013 beyond the £1bn mark. So this is hardly the beginning of a journey or a tentative first step. The performance at Anfield was good enough to avoid humiliation, but not good enough for Manchester United.

Any conversation about recruitment raises the issue – the extremely tired issue – of the need for a director of football at Old Trafford. It doesn’t need revisiting, because the argument has already been won. Clearly United would have benefitted from the extra layer of expertise that the role provides.

But why haven’t they appointed one? It’s been 18 months since they publicly stated their intention to do so and yet, at the time of writing, they appear no closer.

Some delay was understandable. After all, appointments only make sense if they involve the right people and United were entitled to take their time. But eighteen months? If such a position was being created and applications had been invited, that would presumably be among the most attractive jobs in world football. The chance to redesign Manchester United and bring them back to greatness? Barring the few 'name' technocrats who are already under contract – Monchi, Michael Zorc, Fabio Paritici, etc – there isn’t anybody who wouldn’t be interested in that opportunity.

So United would hardly have been short of interest. Nor are they without inspiration. The case for the director of football model continues to be made by nearly every successful club in Europe, so the route towards greater efficiency is well-lit. Modern football's precedents make it clear that allowing businessmen to make sporting decisions is not a good idea. They also suggest that letting head coaches exert too much influence over recruitment is just as much of a mistake. The need for a compromise is clear enough to be inarguable; splitting the two departments is imperative.

One of the other curiosities of this situation – one which perhaps isn’t explored enough – is that appointing someone to oversee football operations would take a great deal of pressure off Ed Woodward. He would most likely continue to be unpopular with supporters, there's no quick fix for that, but it would at least allow him to devolve some responsibility. After all, what seems to keep his negative reputation burning is this issue specifically. The line on Woodward has always been the same: he's a good commercial mind, but a footballing dunce.

So why the reluctance to recuse himself? That's hard to understand. Why the dithering over a change that would refocus him on areas more suited to his abilities? Why the delay in making an appointment that would buffer him from the relentless criticism? Just the token gesture of that kind of progress would probably be popular.

But because it hasn't been forthcoming, it encourages speculation. Or at least people to wonder if everything is really as it seems. If Manchester United actually wanted a director of football, then surely they could have one in place by tomorrow afternoon. If they were truly committed to the modernisation of their football department, then that renovation would presumably already have happened.

The real question, then, is about why they're resisting modernity. It's a rabbit hole of sorts, but it's one worth exploring: what, in the club's mind, are the advantages of keeping faith in a course which has led them so astray?

It doesn't make sense. How important actually is performance?

While you're here, why not take advantage of our brilliant subscribers' offer? Get the game's greatest stories and best journalism for less than £3.50 an issue. Cheers!