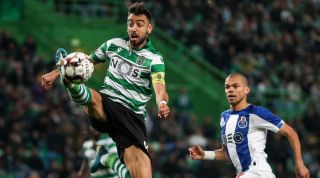 Everything you read about Manchester United today is under the cloud of the defeat at Anfield. Another draw would have given encouragement to United fans and that didn’t look implausible towards the end of the game – before Liverpool counter-attacked to make it 2-0.

But this United seldom come back to win when they go behind and Liverpool seldom lose when they go in front. United did well to hang in, but Manchester United aren’t a club that should be hanging in anywhere.

So that’s a fourth defeat in a month and United’s hugely impressive record against the best teams severely dented. Their record of conceding goals from corners is poor: eight in the league this season.

Meanwhile, Klopp’s record of two wins in 10 games against United was improved against a backdrop of fans singing ‘We’re champions of the world’. Swimming against the tide in the Mersey with an open mouth would have been preferable to listening to any more of that, but United fans would have done exactly the same if it was the other way around – in fact they did so for over 20 years.

So how do United get out of this nightmare, which became worse with news that Marcus Rashford would be out for weeks or months? The club and the player knew that on Friday after he had tests but there was no advantage to Liverpool knowing that. It’s a great shame since the Mancunian is having his best season in the league.

Rashford, Scott McTominay and Paul Pogba would have all improved the team, but even with them fit United’s squad looks light and in need of additions – more so since a versatile back up option captain Ashley Young has joined the Italian exodus.

United have 10 days left of the January transfer window. They remain interested in Sporting Lisbon’s box-to-box midfielder Bruno Fernandes. You may have read about it.

Last summer, the club felt that interest was being driven by the agent who wanted the sale done. United have had problems with agents and don’t want any more, seeking more control of their players. Their policy in the last five years has not worked and they’ve changed their recruitment. Fruition will take time. Some fans have the patience to wait, others less so.

MORE ON THIS 5 players Manchester United could sign this January

As it stands today, United have not agreed any terms with Fernandes, not with the player or his club. There is a significant difference in the valuation of the player between the clubs.

Spurs were reported to have offered €45 million plus add ons last summer, while Sporting are now reported to want €80 million made up of €65m with €15 million variables.

A high-level football agent told FFT: “Normally I’ll criticise United’s recruitment at the drop of a hat but they’re playing this right and reading the situation well. Sporting are desperate for the money. They try to be like Benfica or Porto but they don’t manage themselves as well or have the same cash flow.

“There are no other buyers for Fernandes to my knowledge. Tottenham, in my view, are in a worse position than they were in in the summer. They’re struggling to move players out. They misread the market and were getting away with brinkmanship for years. People (agents) are not playing their game any more.

“What other options are there? The bottom has gone from the Chinese market and the golden days are over there now. United should be prepared to go to the wire.”

“Sporting killed Fernandes in the last transfer window,” explains the agent. “He wanted to go but didn’t make a fuss when it didn’t happen. Instead, he put his head down carried on working and doing well. He’s served them well and they’ll make a huge profit on him. Sporting should get around the table and get it done, but I agree that while it all looks messy to fans there’s very little United can do to stop themselves being linked with 100 players.”

There are different ways of getting deals done.

“United should have said ‘Here is our budget and you have until January 7. If you can’t do business then forget it’. There’s always room for negotiation but the clubs are miles apart. That said, United shouldn’t put all their eggs into one basket. They should – and probably are – running two or three targets parallel to Fernandes.”

United have always maintained that they are committed to the rebuild that Solskjaer wants, that the focus is on the summer and that they will pay the right money for the right players. Fans are weary of hearing that the club will move for summer targets in January if those players become available, but United are adamant they won’t overpay against a player’s realistic valuation, whether now or in the summer.

That’s all fine, but United don’t set the prices in the transfer market any more than when Sir Alex Ferguson (in rude health, by the way, and a regular attendee at Sale Sharks rugby games in addition to Old Trafford) decided there was no value in the market. That wasn’t for him to decide what the market was, what Karim Benzema was or wasn’t worth if there were other suitors – and there were. However, the lack of a queue for Fernandes helps.

With injuries and a huge number of games, United need players in. Solskjaer is being told this from people he would listen to outside the club to save himself, even if it means getting his second, third or fourth targets.

There is always the loan option for United to explore. Clubs like to put players they want to sell in the shop window ahead of a sale, but if the players fitted their plans they wouldn’t be wanting to get rid of them. Barça are hardly looking to loan Leo Messi.

United don’t want to appear desperate, but they have key players missing in a key part of the season and – as they showed against Liverpool – endeavour can only take a team so far.

While you're here, why not take advantage of our brilliant subscribers' offer? Get the game's greatest stories and best journalism for less than £3.50 an issue. Cheers!