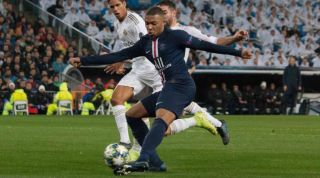 The French sensation burst onto the scene with the Monegasque club in the 2016/17 season, firing the Ligue 1 side to the Champions League semi-finals.

That form earned him a £158 million move to champions PSG, but he has consistently been linked with a switch to the Spanish capital after continuing his stunning rise.

Since arriving in Paris, Mbappe has scored 70 goals in 100 games and won two league titles, as well as playing an instrumental role in France’s 2018 World Cup triumph.

According to Vasilyev, the 20-year-old has admitted that he sees his future at the Bernabeu, despite turning down an approach from Real while he was still at Monaco.

Asked about the prospect of a move, Vasilyev told Le Parisien: “When? I don't know but it seems inevitable.

“The offer from Real Madrid was very interesting for Monaco, and he told me: ‘Vadim, it's too soon for me. I haven't played more than a year in my own country. I'm from Paris and I don't want to leave my country right now’.

“’I want to become a great player here. Real Madrid will wait for me’.”

Mbappe’s superb form has shown no signs of slowing down this season.

He was on target against Real Madrid in a 2-2 draw at the Bernabeu in the Champions League on Tuesday, his fourth goal in four games in the competition.

In Ligue 1, Mbappe already has five goals in eight appearances this season, having missed a month of action with a hamstring problem.

PSG are eight points clear at the top of the Ligue 1 table ahead of their trip to Monaco on Sunday.

TIME UP? Why Arsenal's patience with Unai Emery has to run out sooner rather than later