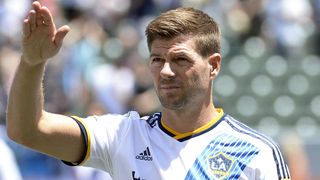 Steven Gerrard was the hero as LA Galaxy continued their winning run with a 1-0 victory over Houston Dynamo on Friday.

The former Liverpool captain struck in the second half as the Galaxy made it three consecutive league wins, moving to six games unbeaten.

The three points moved them up into third in the MLS Western Conference standings, five points behind leaders FC Dallas but with two games in hand.

Houston, meanwhile, remain bottom in the west, stuck on just four wins from 19 games in 2016.

In a match largely dominated by the Galaxy, captain Robbie Keane won a penalty early on after a handball in the box, but he directed his eighth-minute spot-kick wide of the goal.

However, it was Keane's rebounded shot that provided the winner in the 66th minute, coolly slotted into an open goal by the 36-year-old Gerrard.

Keane almost got on the scoresheet in stoppage time but an over-hit pass from substitute Sebastian Lletget robbed the Republic of Ireland international of an easy tap-in.

Houston rarely threatened in the closing stages, with the Galaxy able to comfortably hold out for the slender 1-0 win in front of their home supporters at the StubHub Center.