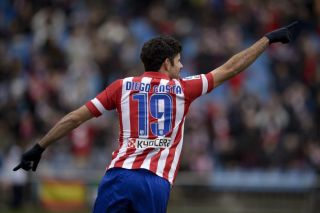 Atleti's hopes of retaining their Copa del Rey crown were ended by city rivals Real Madrid at the semi-final stage this week, while an unlikely 2-0 loss at Almeria saw them toppled as league leaders.

But the hosts were quick to lay down a marker at Vicente Calderon with two goals inside the opening four minutes.

Raul Garcia stroked in his eighth league goal of the season to set the tone for the match, before Diego Costa doubled Atleti's advantage with a cool lobbed finish a minute later.

Diego Godin went close to grabbing a third for Diego Simeone's men in the 52nd minute and Mario Suarez put a header onto the crossbar just after the hour mark, but the Uruguayan eventually made sure of the victory 16 minutes from time with a well-placed header.

The victory takes the home side to 60 points from 24 matches, while Valladolid remain in the bottom three with just 21 points from the same number of games.

Despite facing a trip to Milan in the UEFA Champions League on Wednesday, Simeone did not rest many key men for Valladolid's visit and Thibaut Courtois returned in goal after a spell out with a thigh strain.

The hosts appeared in determined mood to end their recent run of poor form and took the lead in just the third minute as Gabi took a short free-kick to Garcia on the edge of the area and he subsequently steered past Diego Marino.

Atletico doubled their advantage within a minute, with Garcia turning provider as he lofted a pass over the visitors' defence that Costa collected before looping over the advancing goalkeeper.

The final chance of the first half fell to Garcia on the edge of the area, but his tame effort failed to trouble Marino.

Godin nearly opened up a three-goal lead for Atletico early in the second half as he met Gabi's in-swinging corner with a header at the back post, but Marino palmed it around the post.

The match was almost put beyond Valladolid with just over an hour gone as Suarez flicked Koke’s dangerous corner delivery towards goal, but the crossbar came to Marino's rescue.

However, Atleti finally put the game to bed in the 74th minute as Godin rose to head home Gabi's corner and put the pressure back on Barcelona and Real Madrid.