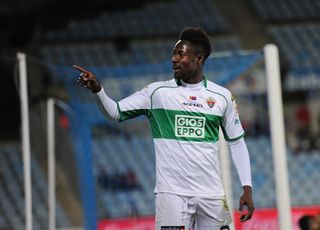 The hosts could have moved six points clear of La Liga's bottom three with victory but they are four ahead of danger following their 12th draw of the campaign, with all their rivals to play this weekend.

Fran Escriba's side looked to be heading for only a second win in nine matches when striker Richmond Boakye found the net in the 63rd minute.

The Ghanian fired low into the net after being played in by midfielder Garry Rodrigues.

However, Elche's lead lasted only 11 minutes as Levante hit back to frustrate the home fans at Estadio Manuel Martinez Valero.

And it was ex-Elche striker Angel that came back to haunt his former employers, netting on the rebound after home goalkeeper Manu Herrera had parried his initial effort following a corner to ensure a share of the spoils.