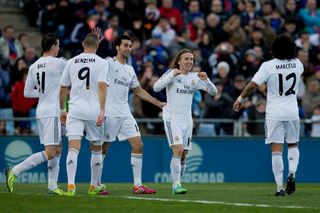 Carlo Ancelotti's men are one of three teams sitting on 60 points in the Spanish top flight, with rivals Barcelona and Atletico Madrid also having won 19 matches out of 24 and drawn three.

Real are involved in Saturday's early kick-off this week, with Elche providing opposition at the Bernabeu.

Star forward Cristiano Ronaldo will serve the last of his three-match ban for a straight red card received against Athletic Bilbao on February 2.

Real have continued to flourish in Ronaldo's absence with the likes of Jese Rodriguez and Karim Benzema taking centre stage.

Jese has scored in three consecutive league games, while Benzema followed up a brace against Villarreal on February 8 with another goal at Getafe last weekend, taking his league tally to 14 for the season.

Real are on a 14-match unbeaten run in La Liga, but it is reigning champions Barcelona that currently top the pile by virtue of a superior goal difference.

Barca do so buoyed by a 6-0 demolition of Rayo Vallecano last weekend, a match that saw Lionel Messi set the record for goals scored at a single Spanish club, breaking the previous tally of 335 set by Athletic Bilbao legend Telmo Zarra.

Neymar was also able to make a goalscoring return from injury, before a cameo in Barca's 2-0 UEFA Champions League win at Manchester City on Tuesday, sealed by goals from Messi and Dani Alves.

Elsewhere on Saturday, strugglers Almeria and Malaga go head-to-head, while Getafe will look to ease their own relegation fears at Celta Vigo.

Diego Simeone's Atleti side hit the road on Sunday to face Osasuna, a side they have beaten in seven of their last eight league meetings.

Atleti arrested a run of three straight defeats in beating Real Valladolid 3-0 last Saturday, two of those losses coming against their city rivals, Real in the semi-finals of the Copa del Rey.

Striker Diego Costa was on target against Valladolid, and continued his improving form after a barren run at the turn of the year with a late winner at Milan in the UEFA Champions League on Wednesday.

In one of Sunday's other fixtures, Athletic Bilbao will aim to boost their hopes of a top-four finish by winning at rock-bottom Real Betis, whose position in the top flight appears ever more perilous.

Strugglers Rayo Vallecano host Sevilla, while Valencia have a home encounter with Granada.

Valladolid and Levante kick-off the latest round of games on Friday, with Espanyol and Villarreal rounding it off on Monday.