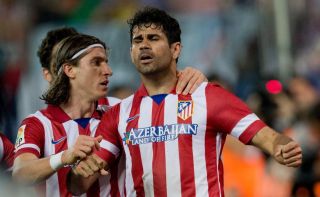 La Liga leaders Atleti travel to the Mestalla with a four-point cushion over reigning champions Barcelona, while city rivals Real are two further behind in third, though they have a game in hand.

Following Sunday's encounter, Diego Simeone's men travel to Chelsea for their UEFA Champions League semi-final second leg, with the tie poised at 0-0 after the first encounter, and a trip to Levante rounds off a testing seven days.

Simeone's charges deserve credit for challenging the domestic dominance of Barca and Real this term, and three points would see them inch ever-closer to a well-deserved Liga title.

The Vincente Calderon side are protecting an eight-match winning run in the league, a sequence during which their defence has been breached just once.

This fixture has been earmarked as a potential banana skin for Atleti. Valencia have lost just one of their last eight league matches on home soil.

Atleti can take confidence from a 3-0 victory in the reverse fixture this campaign, though the corresponding encounter last season saw Valencia triumph 2-0.

The sides have also met in Copa del Rey action this year, Atleti progressing from their round-of-16 tie 3-1 on aggregate after a 1-1 draw in Valencia.

With all the ingredients in place for a classic encounter, Atleti goalkeeper Thibaut Courtois insists the squad is fully prepared to face Juan Antonio Pizzi's men.

He told the club's official website: "As we go game-by-game our biggest test now is Valencia. We're at a good level physically."

"I think we're good, we can make one more effort on the field and that's good for the remaining games. Our first final is on Sunday.

"We have seen in the Cup it will be a tough game, you have to play it as a final and only if we do so, can we move forward."

Atleti will be hoping Pizzi's charges are still licking their wounds from a 2-0 setback at Sevilla in the UEFA Europa League semi-final first leg, a result that leaves their place in the tournament in jeopardy ahead of Thursday's return tie.

Centre-back Philippe Senderos (knock) could join goalkeeper Digeo Alves (hamstring) and defensive duo Ricardo Costa (ankle) and Victor Ruiz (thigh) in missing out, while Atleti will monitor the fitness of winger Arda Turan who has only recently returned following a groin injury.