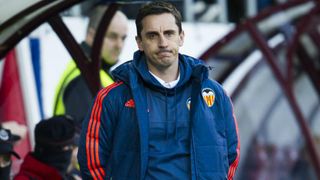 Gary Neville continues to wait for his first La Liga victory as Valencia head coach after suffering a 2-0 defeat at Real Sociedad on Sunday.

The former Manchester United defender has now lost two and drawn three of his first five league matches in charge, as two goals in the space of three second-half minutes from Jonathas secured the hosts all three points at Estadio Anueta.

It was a much better weekend for Atletico Madrid coach Diego Simeone, however, as his side returned to the top of the table with a 2-0 victory at Celta Vigo.

Antoine Griezmann opened the scoring for Atleti just after half-time in the pouring rain at Balaidos before Yannick Carrasco completed the win on 80 minutes.

Borja Baston’s 74th-minute penalty handed Eibar a 2-1 success over Espanyol. Takashi Inui put Eibar in front on the quarter-hour mark before Joan Jordan levelled for the visitors seven minutes later, with Baston then hitting the winner.

Las Palmas are unbeaten in four matches following a 1-1 home draw with Malaga. Tana’s opener for the hosts was cancelled out by Roque Santa Cruz in the second half, with the stalemate taking Las Palmas three points clear of the relegation zone.