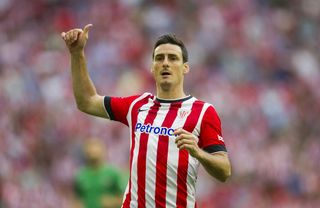 Unai Emery's side knew a victory would see them go above leaders Real Madrid in the table, but Bilbao had other ideas.

Aritz Aduriz scored the only goal of the game in the 13th minute when he got on the end of Markel Susaeta's cross to apply the finish and the visitors were unable to respond.

Sevilla registered just one shot on target and sit fifth in the table as a result of only their second league defeat of the campaign, while Bilbao have won their last two matches and are up to 11th.

Manuel Trigueros scored at both ends as Valencia moved up to second spot courtesy of a 3-1 victory at Villarreal.

Trigueros' own-goal after only six minutes put Nuno Espirito Santo's side ahead, then Germany international Shkodran Mustafi scored twice in the space of nine second-half minutes to put the visitors in complete control.

Midfielder Trigueros pulled a goal back two minutes from time, but the damage had been done as Valencia moved just a point behind Real and above defending champions Atletico Madrid on goal difference.

Lucas Alcaraz marked his first home game in charge of Levante with a 2-1 victory over Almeria which moved them off the bottom of the table.

Alcaraz replaced Jose Luis Mendilibar as coach last month and masterminded his first win at the helm to move his side above Real Sociedad and Cordoba, with the latter now at the foot of the table.

David Barral put the hosts in front 26 minutes in and Victor Casadesus' strike won it 15 minutes from time after Jonathan Zongo had equalised.

Elche ended a run of six league games without a win by securing a 2-1 home victory over Espanyol in the other game to be played on Sunday.