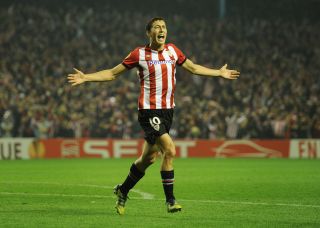 Bilbao went close to taking the lead just three minutes into the contest - played at Real Sociedad's Estadio Anoeta due to delays in the construction of Bilbao's new San Mames arena - Andres Fernandes tipping Markel Susaeta's strike onto the post after the winger had beaten the visitors’ offside trap.

That slice of misfortune may have left the hosts feeling aggrieved, but their luck evened out just after the half-hour mark, Osasuna defender Alejandro Arribas turning Susaeta pull back into his own net.

Ander Herrera went close to doubling the lead nine minutes into the second half, before Arribas saw his header drift wide of the post in a rare opportunity for Jose Luis Mendilibar's men.

Osasuna pushed to try snatch a point, but Bilbao closed things out eight minutes from time, substitute Oscar De Marcos lofting a finish over Fernandes after he had latched on to a sublime left-wing cross from Aritz Aduriz.

Newly promoted Almeria marked their Liga return with an entertaining 2-2 draw at Getafe.

The visitors took a surprise lead on the half-hour mark, on loan Barcelona B striker Rodri slotting home at the near post after an excellent through ball from Liverpool loanee Suso.

Still, Almeria continued to press forward despite that setback, and they rewarded eight minutes before the break as Fernando Soriano converted from close range after Alex Vidal's deflected effort had squirmed into his path.

The men from Andalusia looked to heading towards a win in their first game back in the top flight, but they were denied as Diego Castro converted from the spot at the second time of asking, his re-take going under the body of Esteban after Lafita had been felled just inside the area.