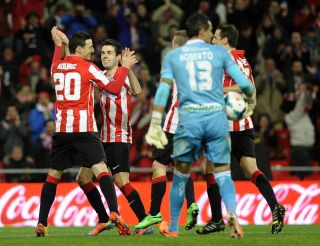 San Mames played host to the final match of a relatively low-key day in Spain, with all of La Liga's top three in action on Sunday, as Barcelona and Real Madrid contest El Clasico and Atletico Madrid travel to Real Betis.

Athletic went into the weekend with a six-point gap between themselves and bitter Basque rivals Real Sociedad, who will be expected to defeat relegation-threatened Almeria on Monday.

Getafe are the only side yet to win a La Liga match so far in 2014 and although Athletic enjoyed the better of the encounter, they made tough work of the victory - taking the lead after 40 minutes when Markel Susaeta fired home a brilliant effort from 30 yards.

Getafe tried to stage a late fightback but despite their dynamic attacking trio of Ciprian Marica, Adrian Colunga and Pedro Leon causing plenty of problems, they could not find a breakthrough.

Meanwhile, Granada opened up clear breathing space over the relegation zone with a 1-0 win against visitors Elche.

The game's only goal arrived just after the hour mark as Yacine Brahimi slotted past Manu Herrera after good work from Youssef El Arabi.

Elche's chances were dealt a blow with 19 minutes to go as Cristian Sapunaru bundled El Arabi over in the penalty area, earning himself a second yellow card, but Fran Rico could only hit the post from the resulting spot-kick.

Real Valladolid were held to a 1-1 home draw with Rayo Vallecano in a meeting between two relegation contenders, the hosts missing the chance to move out of the drop zone with a win as Ze Castro's eighth-minute own goal was eventually cancelled out by former Valladolid midfielder Alberto Bueno just before the break.

In the mid-table clash at Cornella-El Prat, Espanyol and Levante drew 0-0, leaving both seven points behind Sevilla in the race to claim UEFA Europa League places.