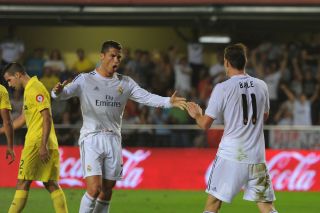 The Welshman made his first competitive start for the club since his world record move from Tottenham, and he began repaying his huge fee by cancelling out Cani's opener at El Madrigal just before half-time.

Cristiano Ronaldo refused to be overshadowed as he put Real ahead with a breakaway goal after 64 minutes, but their lead was short-lived as another former Spurs man, Giovani dos Santos, equalised just nine minutes later.

Real's first failure to earn the full three points this season saw them slip to fourth spot, behind third-placed Villarreal on goal difference - while Atletico Madrid and Barcelona both made it four wins from as many matches.

A stoppage-time goal from Alexis Sanchez earned Barcelona a dramatic 3-2 win over a gallant Sevilla at Camp Nou.

In a rollercoaster encounter, the Chilean forward proved the difference as he struck the winner deep into injury time to seal the points for the Catalan giants after Unai Emery's men had almost completed a superb comeback.

Gerardo Martino's side had dictated the match for long spells and took the lead nine minutes before half-time when Dani Alves nodded Sergio Busquets' cross in, before Lionel Messi doubled the lead in the second half.

Two goals in the last 10 minutes threatened to give Sevilla reward for their persistence, as Ivan Rakitic and Coke struck, but just as he did before the international break, Messi helped inspire his side to victory again as he laid on a sublime assist for Sanchez to spare Barca's blushes.

Atletico Madrid have an identical record to Barca at the top of the table - level on 12 points, 14 goals for and four against - after a 4-2 home win over Almeria.

Things were far less dramatic for Atletico, though, as they shot out to a two-goal lead on the back of a David Villa opener and a Diego Costa penalty.

Rodri pulled one back for the visitors prior to half-time at the Estadio Vicente Calderon, but quick-fire goals to Tiago (64th minute) and Raul Garcia (67th) put the result to bed.

A late consolation to Aleix Vidal gave Almeria something to smile about, but they left Madrid with just two points from four games.

Levante failed to chalk up consecutive wins as they were held to a 0-0 draw at home to Real Sociedad, with both sides left on five points through four matches.