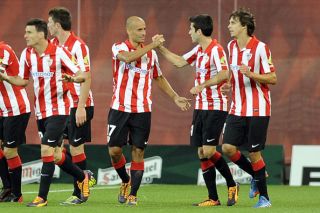 Two goals within two minutes for Athletic in the first-half were enough to seal victory as Villarreal toiled after the sending off of midfielder Bruno Soriano on the stroke of half-time.

The scoring was opened on 33 minutes as Athletic right-back Iraola whipped in a superb cross from deep that was diverted past the keeper by Mikel Rico's head.

When Bruno was dismissed for a second bookable offence just before the break, Villarreal were always up against it to get back into the game.

Despite dominating possession, Celta could not find the breakthrough and were left heartbroken by Diop's late strike.

Juanfran's free-kick from 25 yards struck the wall and found its way to Diop, who crunched a low volley into the corner.

Levante are now into the top-half of the table, while Celta are in the relegation zone with only one win so far this campaign.