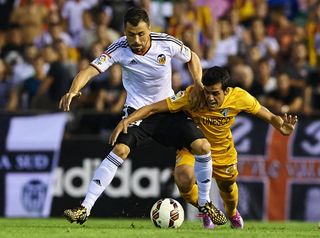 Nuno Espirito Santo's Valencia made the most of a man advantage to go top of the table on Friday.

Sergi Darder's red card in the 27th minute proved to be a game changer, and Valencia capitalised at their Estadio de Mestalla home.

Paco Alcacer and Dani Parejo netted in the first half before Pablo Piatti completed the scoring.

It came after Darder was sent off for an apparently reckless challenge, although he may feel aggrieved by the decision.

Valencia needed just four minutes to take advantage as Alcacer got on the end of a Jose Gaya cross from the left to poke in.

It got worse for Malaga on the stroke of half-time.

Sofiane Feghouli surged into the area and his attempted pass struck the arm of a sliding Weligton, who gave away a penalty.

Parejo's spot-kick was kept out by Carlos Kameni, but the former Real Madrid midfielder put away the rebound.

Piatti completed the scoring in the 56th minute as a team move led to Alcacer teeing him up to finish from just inside the area.

With four points, Valencia are top of the table, but they are one of only four teams to have played their second matches.