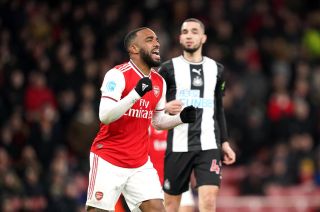 Alexandre Lacazette will do all he can to ensure there is no repeat of his two-month goal drought after he finally found the back of the net again.

Lacazette fired his first goal in 10 games as the Gunners beat Newcastle 4-0 on Sunday.

The Frenchman, who has been struggling with injuries, was dropped to the bench as 20-year-old Eddie Nketiah was given the nod, but he came on and made an impact by bagging for the first time since December 12.

26 of Arsenal striker Alexandre Lacazette’s 33 #PL goals have been scored in home matches, including each of his last nine#ARSNEWpic.twitter.com/WcjkFD2hmv— Premier League (@premierleague) February 17, 2020

The 28-year-old admits he has never had a period like this in his career before and is keen to ensure there will not be another.

“I am really, really happy because I waited for this moment for a long time,” he said.

“As well, I am touched because of the way all my team-mates reacted when I scored that goal.

“It means a lot to me and a lot for the spirit we have in the team. This is good.

“It was really hard and complicated, because sometimes I had some games with no chances, sometimes I missed or the goalkeeper saved it.

“Of course for a striker it is always hard to not score, but it happens in football. Hopefully it is the last time for me.”

It was Lacazette’s first goal of Mikel Arteta’s reign and the striker is impressed with the new Gunners boss’ demands for success.

Arteta explained to Lacazette why he was going to be dropped.

“He explained it well, but I can’t tell you what he said,” Lacazette added.

“He talked with me to give me confidence. As well I worked more with the second coach, so there is some stuff we do to be better on this occasion.

“He is, how can I say… he demands a lot of things.

“I wouldn’t say he is strict, but he knows what he wants and when it is not good we know that as well we are playing poorly. He is a good coach.”

Events at Arteta’s former club Manchester City, who are facing a two-year ban from European football, could give the Gunners a possible route back into the Champions League.

Having remained unbeaten in 2020, they are now six points behind Tottenham in fifth place – a position that would secure Champions League qualification providing City are unsuccessful with their appeal against the ban.

“I think it is early to talk because they can do an appeal and often it happens in football that, what do they say, it gets cancelled,” Lacazette said.

“So us, we just focus on ourselves and we just play our football.

“But even without this we just want to win for the team and fans and to be as high as possible.”

Newcastle were blown away in the second half as Lacazette’s late fourth came after goals from Pierre-Emerick Aubameyang, Nicolas Pepe and Mesut Ozil.

Their afternoon was made worse by a serious-looking injury to Ciaran Clark, who left the Emirates Stadium on crutches and wearing a protective boot following a late challenge from Bukayo Saka.

“He’s got a bad one,” boss Steve Bruce said. “It doesn’t look good. By the state of his ankle it looks pretty serious. We’ll know more in next 24-48 hours.

“It doesn’t look great, the state of his ankle, leaving the ground on crutches. I can’t say now how bad it is but it’s bad enough.”