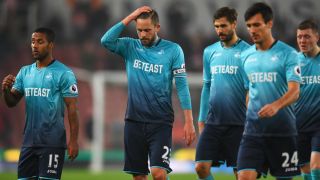 Swansea City boss Bob Bradley said a lack of confidence is crippling his side following their 3-1 Premier League defeat to Stoke City on Monday.

Wilfried Bony scored twice against his former club either side of an Alfie Mawson own goal to give Mark Hughes' side all three points at the bet365 Stadium.

Wayne Routledge's header had allowed the visitors to go in level at half-time, but Stoke were ultimately good value for their win after having hit the woodwork three times prior to the break.

Bradley rued further defensive lapses from his side but says there is a real paucity of belief among his players following a run of nine league matches without a win.

"I thought we had periods when it was okay," he told Sky Sports. "Stoke are a good challenge physically and they had moments when they got the best of us. We still made some critical mistakes.

"We had Leroy [Fer] and Alfie going for the same header, that leads to the starting point for the second goal. We're still making mistakes at times that are costing us.

"We were very pleased with the clean sheet last game. We were second best in getting to some loose balls outside the box and we started the game poorly off a set-piece.

"They are mistakes but mistakes that I think are an indication of not enough confidence.

"It's definitely concerning and we understand that. When things are going in the wrong direction it takes a real strong effort from everybody to turn things around. So we need some results."

Swansea thought they had grabbed a lifeline when Routledge was awarded a penalty after 82 minutes, only for referee Michael Oliver to change the decision to a free-kick just outside the area, where Erik Pieters had first committed the foul.

"I think it can be a penalty because even if the initial contact is on the line then it still goes into the box, so it's up to the referee to see it through," Bradley said.