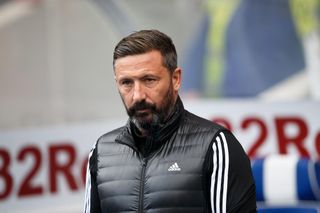 Aberdeen manager Derek McInnes admits Saturday’s trip to face in-form Motherwell will be a serious test of his managerial qualities amid a shortage of central midfielders.

McInnes saw midfielder Lewis Ferguson and striker Curtis Main pick up suspensions to add to his injury crisis when they were both sent off against Hibernian.

The international break has only allowed forward James Wilson to declare himself fit again to face a Motherwell team who sit third in the Ladbrokes Premiership after winning five of their last six games.

Craig Bryson and Stephen Gleeson are both back in training but are not anywhere near 100 per cent fit while Funso Ojo remains out.

That leaves 18-year-olds Dean Campbell and Ethan Ross, fresh from victory for Scotland Under-19s against Germany, in line to start in the centre of the park.

McInnes said: “We have been doing some work on different alternatives and how we can look to play without a fully fit Craig Bryson, a fully fit Stephen Gleeson, without Lewis Ferguson, Dean has been away.

“Sometimes as a manager it’s easy, you have a full selection to choose from, you are winning games and there’s very rarely any changes and just ‘same again lads, on you go’.

“And there are other times when the injuries start to pile up, certainly in the one area of the pitch, you have to manage the situation. That’s what it is being a manager sometimes, you have to deal with that.

“It’s not always easy but you’ve got to try and find a way of still getting results and hopefully we can find a way on Saturday, against a good team who are going well.”

Gleeson has done some training sessions this week but has not played all season while Bryson has only made five appearances since moving from Derby to the Dons as Graeme Shinnie went the other way.

“Bryson has done bits and pieces but still not ruled in for Saturday.

“He was brought in in the summer to be an important player. We spoke often enough about losing a Shinnie type, the leadership qualities, that drive, energy and quality from midfield and he was the one.

“And we have not had it. We have had it in bits and pieces and never really had him at 100 per cent.

“He has had a tough time, Craig, to be the influence that he wants to be and what we need him to be.

“It’s certainly not going to be that 100 per cent influence he can give us at this moment in time. We will speak to Craig and decide whether he is available for Saturday or whether we work towards the next game.

“But in light of the injuries we have got in midfield and the suspension to Ferguson, at this stage, fully fit and ready to be selected, the only natural midfielder we have got is young Dean Campbell.”