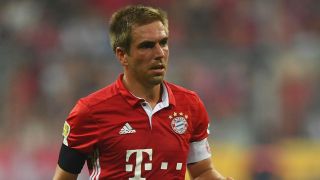 Philipp Lahm has stressed Bayern Munich cannot afford to rest on their laurels following their sublime start to the 2016-17 campaign and must keep improving as they prepare for their Champions League opener against Rostov on Tuesday.

Bayern started the season with a 2-0 DFL-Supercup win over Borussia Dortmund and a 5-0 DFB-Pokal victory over Carl Zeiss Jena, before seeing off Werder Bremen 6-0 and Schalke 2-0 in the Bundesliga.

Nevertheless, Lahm is not getting carried away and has warned Bayern cannot afford to underestimate Rostov.

"None of us really knows the opponents we're going to face," Lahm told reporters when asked about the upcoming clash with the Russian outfit.

"But it's important to be ready and take three points straightaway.

"It's not like we expect ourselves to just keep marching on after the last few seasons. It is not easy to always deliver when you have to. There are no guarantees.

"We have to keep improving, starting on Tuesday."

Bayern have also been paired with Atletico Madrid and PSV in Group D.