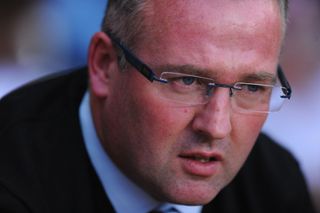 The Premier League club were stunned in last year's semi-final when they suffered a 4-3 aggregate defeat against then League Two side Bradford City.

And they were handed another potential banana skin when they were drawn against League One outfit Rotherham in round two.

But they dispelled any fears of an upset with a comprehensive 3-0 home victory, courtesy of goals from Andreas Weimann, Christian Benteke and Fabian Delph.

And Lambert was thrilled with the way his side handled the expectation of being favourites.

"You have got to earn the right to win the football match but I thought we would with the team we put out," he said.

"There is a different feeling this time to Bradford. The squad is really together and strong and we trusted them to go out there and perform and they have been excellent.

"Cup football is a different thing because you can play against a small team and they are a totally different animal to what you are used to playing in the league. But we handled it well."