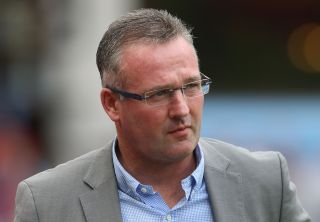 The Villa Park outfit were handed a difficult start to the campaign with visits to Arsenal and Chelsea, while a home game against Liverpool is next up on Saturday.

But they put in a excellent display to win 3-1 at the Emirates Stadium, and followed that with a gutsy display in their 2-1 defeat to Jose Mourinho's side at Stamford Bridge.

And Lambert is delighted with the high-tempo football his side have produced in their visits to London.

"We have come away from two difficult games with our confidence really high," he said ahead of the match with Liverpool.

"We're vibrant - and so we should be because of the way we have played.

"The lads are playing incredibly well at the moment. We have got the bit between the teeth, which is great.

"They have been outstanding in the last couple of games. We went to a team who could win the Premier League and who will be playing in the Champions League. But we took the game to them and gave them a right fright.

"The way we are playing, there's energy and pace. My own view is we have a really good style of football.

"We play quick, energetic football. Hopefully everyone who comes to watch us enjoys it."