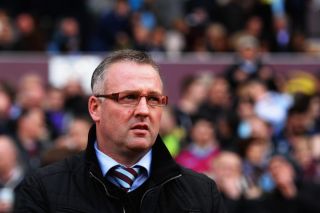 Speculation has mounted over recent weeks that the American may cut his ties with the club he bought in 2006.

A sale could have an impact on Lambert's future, but the Scot has reiterated his intention to stay at Villa Park come what may.

"I honestly don't know (if Lerner will sell)," said Lambert. "I'm being totally honest with you.

"I'm not privy to what goes on on that side of it. If a new owner comes in you have a conversation, that's normal.

"But I fully intend to be here. That's me being totally honest. If people come in you sit with them and see what happens.

"If they don't you sit with Randy, which I intend to do at the end of the season, and Randy will say what he's got to say. I fully intend to be here.

"He was over here on Tuesday and I had a chat with him, not a long chat I might add.

"My own opinion is I'm not privy to everything that goes on. I have a good working relationship with him.

"I'm totally relaxed about everything. I'm not uptight about anything. We've got to try and win football matches, which was always the case."