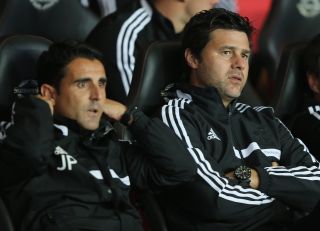 England international Lambert was taken off 10 minutes before half-time during Saturday's 4-3 home win over Burnley in the third round of the FA Cup.

But after the game, Perez confirmed that the injury to the striker was not serious.

"We don't want to take any risks when we are in a tough period for injuries."

Lambert, who had added to an earlier goal from Nathaniel Clyne, was replaced by former Burnley striker Jay Rodriguez, who put his side 3-2 up midway through the second half after goals from Sam Vokes and Danny Ings had brought the visitors level.

Another substitute, Adam Lallana, made it 4-2 with 17 minutes remaining before Burnley set up a nervy finish when Kevin Long poked home a corner with three minutes to go.

Vokes and Ings both missed good chances for the visitors with the score at 2-2 and 3-2 respectively, and Perez felt Southampton's efficiency in front of goal was the difference.

"Sometimes one of the sides is clinical and the other isn't," he added.

"That was the case today. We scored two great goals (in the first half).

"Burnley started the second half better but we woke up after they equalised."