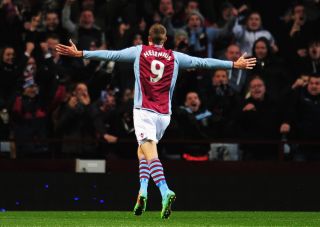 The Denmark international has made just three Premier League appearances since completing a £1.2 million transfer from Aalborg in the close-season.

But Helenius looks likely to play a more prominent role in the second half of the season with Christian Benteke struggling for form and Czech international Libor Kozak ruled out for the rest of the campaign with a broken leg.

And Lambert feels the 22-year-old will grow in confidence after opening his Villa account in the 2-1 defeat to Sheffield United in the FA Cup last weekend.

"If there is one plus following the Sheffield United defeat it's that I thought Nicklas did well when he came on," he told The Birmingham Mail.

"It was a great goal he scored. He's had a bit of a hard time since he's been here.

''When you are that young and you are trying to get to a level, sometimes people will hit the ground quicker.

"He's a really lovely guy, a nice guy and it was a good goal so that will do his confidence the world of good."

Lambert also confirmed Kozak has undergone surgery on his leg and is hopeful of a pre-season return for the former Lazio man.

He added: "Everything went well.

"Everybody is quite happy with the operation, so hopefully it is a recovery for him now and we get him back. Hopefully he will be back for pre-season."