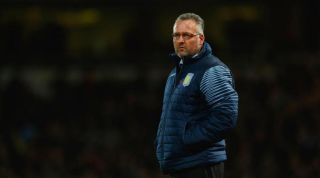 Villa took the lead towards the end of the first half through Joe Cole's instinctive close-range effort, but Danny Ings' late penalty ensured that the spoils were shared at Turf Moor.

And Lambert insisted that his team - whose preparations for the game were hindered by Roy Keane's departure from his assistant manager role on Friday - would have been worthy winners.

"We should have been out of sight in the first half, to be honest with you," the Scot said.

"The way we played for long spells in the game was really good and this was a game that we should have won.

"It was a game that got away from us, but coming to a newly promoted team is always tough.

"We lost two points and could have lost three when Burnley hit the post at the end, but for 80-odd minutes we were well dominant in the game."

Lambert went on to praise the performance of Cole, who marked his first Premier League start for Villa with a clever finish.

"The way Joe Cole played, I thought he was outstanding. If we had him four and five years earlier we would have had a really top player on our hands there," Lambert added.

"He (Cole) is getting fitter and fitter with every passing week. You watch him in training, he has great enthusiasm for a guy that's won everything in the game and I thought his performance was outstanding."