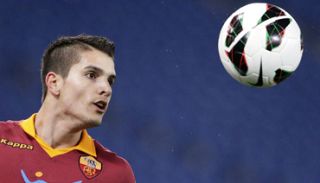 Lamela, named in coach Alejandro Sabella's squad on Thursday, could step in for Messi if he does not recover in time from his injury to face Colombia at home on June 7 and Ecuador away four days later.

The 21-year-old has one cap from a 2011 friendly playing for an Argentina team picked solely from the domestic league when he was still at River Plate. He was also in the full squad for a friendly in Switzerland 15 months ago but did not play.

Midfielder Lucas Biglia was recalled to the squad after helping Anderlecht win the Belgian league title, with Velez Sarsfield's Fernando Gago out through injury.

Wigan Athletic striker Franco Di Santo was dropped from the squad that beat Venezuela and drew away to Bolivia, when he was a substitute, in March.

Argentina could secure their berth at the 2014 finals in Brazil in these two clashes with the teams directly below them in the South American group.

They lead the nine-nation group with 24 points from 12 matches. Ecuador are second with 20 points and Colombia third on 19, both with a game in hand.

The top four at the end of the group phase in October automatically qualify for the finals with the fifth-placed team qualifying for a play-off against an Asian side in November for one more berth.