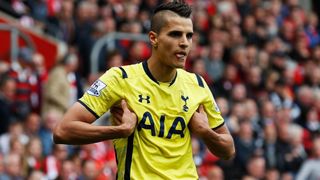 Tottenham midfielder Erik Lamela is happy at the club and sees his future at White Hart Lane.

Lamela, 23, has been linked with a move away, with reports suggesting the Argentine is no longer in Mauricio Pochettino's plans.

But the former Roma man said his future was at Tottenham.

"I obviously see myself here [in Tottenham]," Lamela said.

"Those questions start to be usual but I am very good here and I see myself in here."

Tottenham sit sixth in the Premier League with four matches remaining, with their chances of qualifying for the UEFA Champions League slim.

Lamela said there was still work to do for his team.

"The evaluation is positive. We still have to finish the Premier League," he said.

"It will be good to gain access to the European competition but nothing is decided yet so we better wait."

As for his chances of being picked in Argentina's Copa America squad, Lamela said: "Everyone works towards this goal, but nobody knows who will be on the list yet.

"I have done my part as I keep training everyday in order to improve."