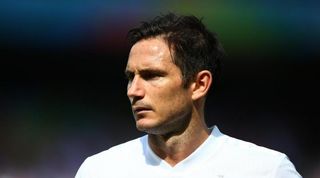 The 36-year-old former Chelsea man - currently on loan at Manchester City from newly formed MLS franchise New York City - scored 29 goals in 106 appearances for his country after making his debut in 1999.

Lampard featured at two European Championships and three World Cups with England, including the most recent tournament in Brazil, where Roy Hodgson's men were eliminated at the group stage without winning a match.

Team-mate Steven Gerrard had already confirmed his retirement, but Lampard took longer to decide on his international future.

"I have taken the decision to retire from international football," he said in a statement released by his management company.

"It has been a very tough decision for me to make which is why I have given it so much thought since the World Cup.

"I have always been exceptionally proud and honoured to represent my country and have to say looking back I have enjoyed every minute of wearing the England shirt.

"Due to my club career now going in a different direction it is of utmost importance for me to consider my family first. Also, to concentrate on how I can perform consistently to the best of my abilities over my next few years in club football.

"It is now the time to move forward and I feel very confident that with Roy Hodgson in charge, the young players that we have coming through, and the changes that are being made throughout the development of the youth system in this country, that we will have success in the future and a team that this country deserves.

"I would like to thank all the managers that I have worked under, all the players that I have been fortunate enough to play alongside, and all the England fans for their support, not only at home but particularly on their travels with the team around the world.

"I now look forward to continuing to support the team as a fan and wish them ever success for the upcoming campaign towards France 2016."