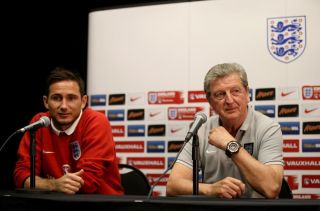 Regular skipper Steven Gerrard is set to be rested for the FIFA World Cup warm-up friendly, which is taking place in Miami.

And with inexperienced squad members like Raheem Sterling and Ross Barkley eyeing a chance to impress, they will be guided by the experience of Lampard.

The midfielder commented: "I'm very proud as always and happy to be captain and the responsibilities that come with it."

Hodgson is likely to make a string of changes as he runs the rule over his squad before their World Cup opener with Italy on June 14.

"There will be changes in the team," he explained. "I can't speak in detail about them because we are still to go through our team meeting, where we discuss what we expect from Ecuador, and at that time I may tell the team."

Hodgson believes there is little he can learn about the players from the fixture, and stated his primary concern is that the squad play to the level he knows they are capable of.

He added: "I don't know if I have any particular thoughts or learning (from these games).

"I am very comfortable with the players I have brought here I am more interested to see them playing well.

"It is a preparation game in the greater realm of things leading to the Italy game on 14 June. I hope I see the team play well."

On the threat of Ecuador, Hodgson commented: "We expect Ecuador to approach the game the same way as us.

"I am sure their main focus is Brazil but they will be interested in the game because it gives them a chance to continue their preparations.

"We know they are a very good team. Like us, they will want want to see a very good game of football, no injuries and having considered they have taken a step forward."