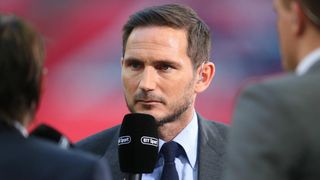 Frank Lampard has confirmed he is in talks to become Derby County's new manager.

Following his retirement as a player in February 2017, the Chelsea legend has been clear about his desire to go into coaching and is believed to be the leading contender to take over at Pride Park.

The Rams are on the hunt for a successor to Gary Rowett after his switch to relegated Stoke City this week.

Rowett had led the club to the Championship play-offs, but a semi-final defeat to Fulham hastened his exit and appears to have paved the way for Lampard to take his first steps into management.

"There's been interest at Derby. I've been speaking to them. I'm ambitious and want to become a manager at some time," the 39-year-old told BT Sport, for whom he works as a pundit.

"It's a big club with big history and big tradition, which I like. We'll carry on speaking and we'll see."