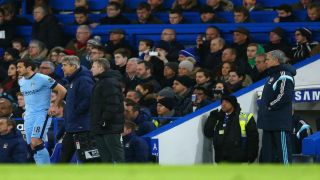 Lampard spent 13 years at Stamford Bridge before leaving the London club as a free agent in June.

The former England midfielder is Chelsea's record goalscorer, but was given a mixed reception when he returned to the club with City on Saturday.

Lampard played a major role in Chelsea's success in Mourinho's first spell as manager of the Premier League leaders, but did not speak to the Portuguese after the 1-1 draw at the weekend.

Mourinho did shake hands with the former West Ham man, though, and Lampard says there is no rift between the pair.

He said: "I don't want to try to say that there's any issue at all.

"I got a text at Christmas, I texted him back. We spoke in the dressing room, 'How's the family?,' the usual.

"We are grown men, you know what I mean? We are at different football clubs. I'm sure we are big enough that none of this is going to get in the way of our relationship and how we are personally.

"We remain close. This is football, it's sport and I haven't spoken to him that much recently.

"I don't think there's room for bitterness and if there is then I'll deal with that down the line."