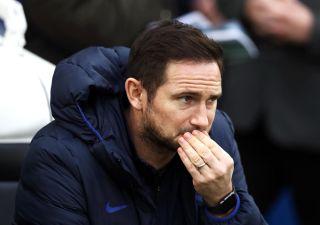 Frank Lampard has challenged Chelsea to find a new killer instinct to end their inconsistency.

The frustrated Chelsea boss lamented the Blues’ turbulent Christmas run as a microcosm of their Premier League season so far, in the wake of the 1-1 draw at Brighton.

Chelsea dominated the first-half at Brighton but slipped off the pace, leaving manager Lampard admitting the Blues must raise their level for the second half of the campaign.

The Blues remain fourth in the table despite already losing four home matches this term, with Lampard clear on where the Stamford Bridge men must sharpen up.

“We’ve got work to do, because the Christmas period has probably been a small showing of our season,” said Lampard.

“The Tottenham win was a fantastic all-round performance, at Arsenal on Sunday we showed great spirit and fight for a young group. Against Southampton we struggled to break them down and lost a game at home.

“And then today, from a game where we should have the mindset to kill it, because the opportunity was there, particularly the first-half, we didn’t take it.

“So that shows the good and the bad of us, it shows that we must remain humble, we must work hard.

“We’ve had two great results over Christmas but there’s a lot of work to do.

“It’s not the mindset so much that it’s how you work in games, how you deal with things in games. That’s part of the process.

“It was an incredible equaliser, for sure, but it is two points dropped. The first-half, if we’re ruthless the game’s out of sight.

“We had opportunities to play people in to score, make decisions around the box, to keep switching the ball and to do what we did in the first 20 minutes. And we came off that slightly.

“And we allowed (Brighton) to feel like they were still in the game. And they are a good team, so when they started to play a bit later in the game then they caused us problems.”

Christian Pulisic spurned a hatful of opportunities as the USA forward repeatedly turned Brighton’s defence inside-out, only to fail to deliver any end-product.

And Lampard admitted his Chelsea players lacked enough cutting edge when in possession at the Amex Stadium.

“I think sometimes you can accuse a bad period of the game on a lack of fight, urgency or whatever, but today wasn’t any of that; today was a lack of quality on the ball,” said Lampard.

“We had a situation in the first-half where we knew the problems for them, we were finding our full-backs easily and controlling the wings.

“And then we started losing or giving the ball away, and when we were getting opportunities to score we were not taking them.

Jahanbakhsh bagged his second goal in as many games as he continues to shrug off a previous 20-match league drought.

And Brighton boss Graham Potter insisted he wants to keep the Iran striker at the club despite rumours of a January exit.

Asked if Jahanbakhsh had already notched the goal of the decade, Potter said: “So far, yeah. It was a great strike and I’m really pleased for him.

“He’s been fantastic here, hugely professional and has worked hard and improved greatly. He’s getting his chance, playing good football and as far as I’m concerned I want him to stay.”

Dan Burn suffered a suspected broken clavicle, but Potter insisted there was no ill intent from Chelsea’s Reece James as the duo clashed competing for a header.

“Dan’s going to be out for six to eight weeks,” said Potter.

“I don’t think there was anything sinister in it, just a really heavy contact. These things happen.”