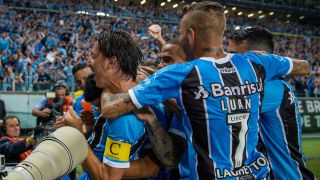 Gremio claimed the Copa Libertadores for the third time in their history after defeating Lanus 2-1 in the second leg of the final.

Fernandinho and Luan scored in the first half as Gremio triumphed 3-1 on aggregate in the South American showpiece on Wednesday.

It was Gremio's first Libertadores title since 1995, ending a 22-year wait for the Brazilian side, who also booked their place at next month's Club World Cup in the United Arab Emirates.

Gremio carried a 1-0 lead into the midweek return fixture thanks to Cicero's 83rd-minute strike last week.

And Gremio continued where they left off away to Argentina's Lanus courtesy of Fernandinho.

Luan silenced the home crowd three minutes before half-time, when he weaved his way past three defenders and scooped the ball over Lanus goalkeeper Esteban Andrada.

Jose Sand's successful penalty pulled a goal back for Lanus with 18 minutes remaining but it was nothing more than a consolation as Gremio – who finished with 10 men following a second yellow card for Ramiro - now look ahead to a Club World Cup semi-final showdown with either Pachuca or Wydad Casablanca on December 12.