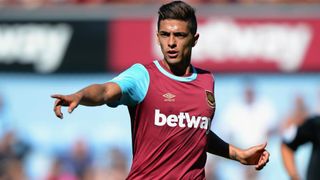 On-loan attacking midfielder Manuel Lanzini said he would like to be back at West Ham next season on a permanent basis.

Lanzini is on a season-long loan from Al Jazira after making the move to the United Arab Emirates from River Plate in Argentina.

The 20-year-old said he would like to return to West Ham next season, with the club set for a landmark year as they move home grounds to the Olympic Stadium.

"I hope to be sitting here next season in this dressing room. It’s what I want," he told the Daily Mail. "When you’re at a club and feeling like you have an important role, you want to stay.

"But I am focused on this season. I have six or seven months of my loan to run so we’ll see what happens.

"This is going to give West Ham a boost. As a stadium, it’s fantastic — the facilities around the complex. It will be great for the players and fans alike. I hope we can do our bit to live up to the setting."

The Argentina youth international has scored four goals in 12 appearances for the east London club and admits he is loving life in the England capital.

"There were several offers to come to Europe," he said. "All were sort of loan deals and West Ham was the best for me. It is a well-organised club where I can develop as a footballer and a human being.

"There's a great group of players with several Spanish speakers, and coaching staff with faith in me who give me confidence.

"London is one of the great cities of the world, everyone wants to see it. The Premier League is fast and dynamic, it suits my game. It has all made the adaptation process easier. I’m very comfortable here."

Lanzini has been ruled out for the past four weeks with injury but is set to line-up against Aston Villa on Boxing Day pending a late fitness test.

"It was a blow because I was in good form and playing consistently," he said. "It is like starting again after an injury."