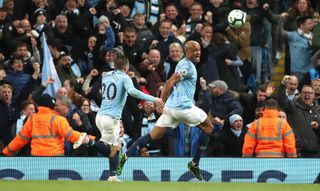 The long-serving Kompany once again proved the man for the big occasion as he netted with a ferocious 30-yard strike 20 minutes from time to settle a tense encounter at the Etihad Stadium.

The 1-0 win lifted treble-chasing City back to the top of the Premier League, one point ahead of Liverpool, with just one game remaining in a compelling title race.

We will see you again “citizens”! One step more. Only one. C’mon @ManCity !💙 #AL14 You’re welcome for the assist, captain @VincentKompany 😋 pic.twitter.com/ui0IjZpega— Aymeric Laporte (@Laporte) May 6, 2019

Kompany’s decisive contribution ranked alongside his vital winner against rivals Manchester United during the 2012 title run-in for importance and elevated him yet further among the City greats.

Fitness issues may mean the 33-year-old is no longer a regular starter but the influence of the three-time title-winning skipper on the side shows no sign of waning.

Fellow central defender Laporte said: “It is amazing, unbelievable. I never see one goal like that – maybe because I wasn’t on the pitch, I don’t know – but we are so satisfied with this game.

“He is a guy (who is) very important for us, for the club. I think he gives us a lot of things. He is an example for us.

“We have to improve and keep working with him because he can give a lot and he is a very good guy on and off the pitch.”

Kompany’s sensational strike came as City piled on the pressure on the second half, knowing anything less than a 13th-successive league win would hand the initiative to Liverpool heading into the final fixtures.

Leicester had made life difficult, defending stubbornly and posing a threat on the break.

Former City striker Kelechi Iheanacho should also have done better with a late chance to equalise, but the hosts did their job.

They now know victory over Brighton on Sunday will see them become the first back-to-back title winners in a decade, regardless of how Liverpool fare against Wolves.

Laporte said: “We are focused on us. It is the most important. We have to win every single game and if we win the next game, we are the champions.

Leicester midfielder James Maddison felt the visitors, whose hopes of finishing seventh were ended by the loss, were unfortunate not to take anything from the game.

0 – Leicester City have never won away from home on a Monday in the Premier League, drawing three and losing eight of their 11 such matches. Blue. #MCILEIpic.twitter.com/6mOQwdd7Sw— OptaJoe (@OptaJoe) May 6, 2019

Maddison said: “We were still going for seventh. If we had won both games there was still a chance we could get that, and that was our focus.

“We were playing for ourselves, that pride, and there was no chance we were going to come here and lie down. We wanted to give a good account of ourselves.

The Foxes host Chelsea in their final game.

“We’ve proved in recent seasons that momentum going into a new season is massive,” said Maddison.

“That is something we will look to do. We want to finish on a high and try to get more points.”