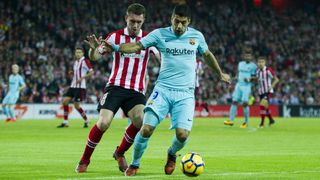 Aymeric Laporte has been left out of Athletic Bilbao's matchday squad for the visit of Eibar on Friday, with Manchester City reportedly closing in on his signing.

The 23-year-old centre-back has been a regular for the Basque side this term, playing 19 times in LaLiga.

But coach Jose Angel Ziganda has left him out of his squad of 18 players for the Eibar clash, having previously confirmed the Frenchman was available for selection.

City have been strongly linked with Laporte in recent days and are said to be willing to pay his €65million release clause.

Athletic's team selection has now added fuel to speculation that he will bid farewell to the club's supporters at the game. Laporte was spotted at San Mames prior to kick-off.